Magnetite, the Great Pyramid and order of our Universe

At the top of this post is a 3-D picture of an octahedron.  This is a very important shape to understand and it yields many clues to the manner life as we know it is constructed.  It is a structure of both energy and form, so let's get acquainted with this geometry!

If you were to imagine yourself standing in the center of this geometry, the outside edges would be the boundary of your "personal space".  The energetic bodies flow from geometric flows of non-physical light energy in varying degrees of complexity.  As we raise our vibrations and focus our intentions we are able to consciously connect with these geometries to flow our energy in more powerful ways.

One fairly well known construction is the Merkaba, which loosely translated means "vehicle of light".  The merkaba looks like this: You can see that it's constructed of two 3-sided pyramids turned and imposed upon each other, yielding a structure that has 6 points.  There are other constructions and they all follow the order of the Platonic solids.  This is something for discussion at a later time, so let's get back to magnetite and the octahedron.

The octahedron is found in our bodies and in the largest forms of our universe, how interesting!  Could this mean that there is an implied order to Creation?  Perhaps it's not as random as it appears.  So let's look at both ends of the equation.

In 1992 Dr. Joesph Kirschvink of Caltech published findings that "human brain cells possess a highly magnetic mineral known as magnetite".  He believed that this magnetite allowed animals from bees to whales to navigate using the Earth's magnetic field.  After researching human brain tissue he found that most regions of the brain have 5 million magnetite crystals per gram, while the tough membrane that covers the brain had 100 million crystals per gram!  It's estimated that every brain on average has 7 billion magnetite crystals, weighing a total of one-millionth of an ounce.  He also found that magnetite interacts over a million times more strongly with external magnetic fields than any other biological material, including iron in red blood cells.

Dr. Kirschvink went on to say that based on his research, "higher life will not evolve on planets without a steady geomagnetic field".  Interesting, to say the least!  What I propose is that we are affected profoundly by our environment and we do process invisible light energy via these magnetite crystals in our brain.  What's also occurring is that the planetary magnetic field is changing substantially.  The resonant frequency of the Earth has shifted significantly in recent years, after remaining constant for as long as scientists have been able to measure.  Therefore, is it likely that we will re-orient our consciousness via the change in input to these magnetite crystals in the brain?

The pineal gland, which is located roughly at the center of your head, has an abundance of magnetite crystals.  This glandular structure is believed to be the receiving point of the higher mind and has been revered in subtle ways throughout history.  If you read David Wilcock's latest book "The Source Field Investigations" you'll find reference to many accounts of the ancients holding this area of the brain as very important if one was seeking higher awareness.  Are we preparing to make a quantum shift as a species?  Remember, the word quanta is defined as a discrete quantity of electromagnetic or light energy.

In another article by H. Coetzee Ph.D. I found a description of how these magnetite crystals might act:  "The pyramidal cells act as electro-crystal cells immersed in extra-cellular tissue fluids, and seem to operate in the fashion of a liquid crystal oscillator in response to different light commands, or light pulses (quanta) which in turn, change the orientation of every molecule and atom within the body."  So you may see that our relationship to light and electro-magnetic forces are the impetus for evolution.  When you think about it it is really easy to see.  We mainly eat plants or things that eat plants.  What do plants do?  They convert light into stored energy of a physical form.  Perhaps we can look to nourish ourselves not only directly on the energy that plants use to exist, but as well the unseen and little understood non-physical energies that are coming to us now?

To add more weight to this argument, according to Einstein matter is to be regarded itself as part, in fact the principal part of the electromagnetic field and electric energy is therefore the fundamental origin of our entire physical world.  Heady stuff to say the least!

Now let's move on.  I mentioned the Great Pyramid in the title of my article for good reason.  This pyramid is actually not a pyramid, but the largest known octahedron on our planet.  Yes, that's correct, there is an inverted pyramid BENEATH the Great pyramid extending several hundred feet below the ground!  In 2012 I was privileged to have the opportunity of being inside this amazing structure and I can honestly say that there's no way humans as we've known them could have built this as a pyramid, let alone as a giant octahedron.  Even today we do not possess the technical skill to create and orient this amazing structure!  What's even more interesting is that it's located on the main nodal point of the electromagnetic grid of Earth.  Obviously, whomever put it there had intimate knowledge of the structure of matter and the Universe, but for what reason?  It must have been important, as  pyramids have been discovered all over the planet, not just in Egypt. Now for the macro view, something that I believe no one has touched upon so far.  There is an interesting theory put forth by E. Battaner and E. Florido in 1998 in an article titled "The egg-carton Universe" that states that despite what we might see in the night sky, there is order to all of the universe in the shape of an array of octahedron's! 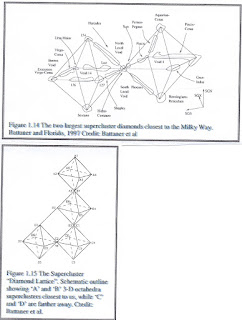 From "Tuning the diamonds" by Susan Joy Rennison:  "There is nothing static in the universe, and our Milky Way, seems to be moving, spreading away from other galaxies at tremendous speeds.  There are billions of galaxies in the universe, but they are not randomly distributed at all and the universe appears to have an overall shape and structure on a large scale.  Galaxies tend to be part of groups called clusters and our Milky Way is part of a group of about 40 galaxies known as the Local Group, which is actually quite a small grouping.  Most clusters tend to be part of larger groupings called superclusters and our Local Group is part of the massive Virgo supercluster, which contains over 2000 member galaxies.  Now, as astronomers map the location of these galaxies, an amazing big picture is emerging.  What was once assumed to be random distribution of galaxies is now revealing itself to be a complicated  design.  Large galactic superclusters are gathered around what appears to be giant voids or bubbles, which reveal and octahedron structure on a huge scale."

Battaner and Florido went on to explain " The distribution of superclusters in the Local Supercluster neighborhood presents such a remarkable periodicity(i.e. ordered pattern) that some kind of network must fit the observed large-scale structure.  A three-dimension chessboard has been suggested.  The existence of this network is really a challenge for currently suggested theoretical models... In this case, however, the identification of real octahedra is so clear and the network is so noticeably well-defined that a direct inspection is straightforward."

This flies in the face of the so-called Big Bang which supposes that the universe is in a state of constant expansion from a center point.  It is certainly moving, but in a beautiful ordered fashion, a "dance of creation".  There wasn't a Big Bang, but something much more elegant was and is going on and we're part of it too.

In conclusion what I'd like to say is the same thing that created the universe created you.  You are intimately connected to that force of creation by the crystalline content in your brain which is the point where the light that enters your field is transmitted to your body.  In a sense each of us is a mini-universe.  As above, so below.  The larger universe is the pattern and as we continue in our evolution we access more and more of the pattern, coming into harmony and balance.  Anything that we do to heal and create, including energy work, working with crystals, herbs, shamanic practices, meditation, etc. is to come into a greater conscious awareness of our perfection.  Through conscious participation in life we do evolve.  Evolution is not a straight line but a long series of quantum shifts.  The time period we are now in is one of those shifts.  Trust in your abilities to adapt to this shift by expressing what gives you the most happiness in your life and you'll be just fine.  Resist the flow of your own piece of this love energy and you will be recycled.  Either way you'll eventually end up home, the only decision any of us make is how long it's going to take!

Biomagnetism and Bio-electromagnetism:  The Foundation of Life by H. Coetzee Ph.D.